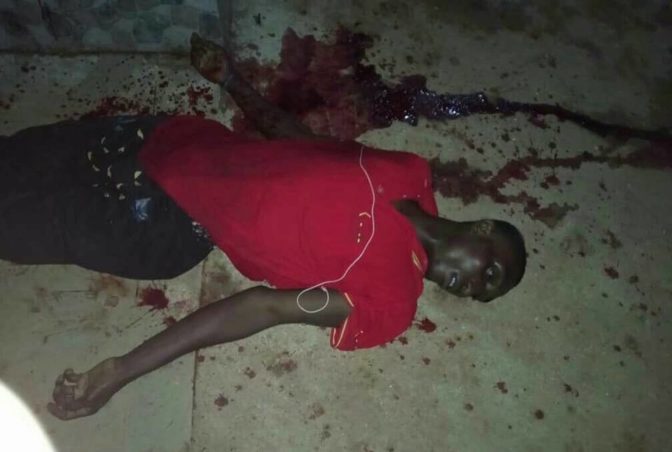 A young man was shot dead by gunmen at the permanent site of Federal Polytechnic Oko campus in Anambra state.

According to reports, the deceased popularly known as ‘De Moon’ who was a final year student of the department of Banking and Finance at the institution, was killed in cold blood on Thursday night (yesterday).

ATTENTION: ARE YOU A FINAL YEAR STUDENT OF FEDERAL POLYTECHNIC OKO? GET YOUR PROJECT TOPICS AND MATERIALS HERE

Students who reside at the Permanent Site of the school campus, scampered for safety following the gunshots only to discover the student laying in the pool of his blood moments later.

THE EFFECTS OF POOR RECORDS MANAGEMENT IN AN OFFICE ORGANIZATION IN FEDERAL POLYTECHNIC, OKO

The real reason for the gruesome murder is yet to be ascertained as at the time of writing this report as some claim the attack was carried out by rival cultists while other students said the deceased was dragging his phone with the gunmen/robbers before he was shot at close range and zoomed off on a motorbike.

The incident has caused panic among students who are calling on the relevant authorities to come to their aid.

√ FOR INTERNATIONAL CLIENTS OR PAYMENTS VIA US DOLLAR (pay $10 USD) CLICK HERE INSTRUCTIONS AFTER PAYMENT 1.Your Full name 2. Your Active Email Address 3. Your Phone Number 4. Amount Paid 5. Project Topic 6. Location you made payment from (BANK DEPOSIT/TRANSFER OR ONLINE PAYMENT) SEND THE DETAILS TO Schoolprojecttopics@gmail.com  OR SMS/CALL 📞 +2348101525763

WHY YOU MUST TRUST US - WE ARE GENUINE BECAUSE NO FRAUDSTERS CAN PUBLICLY DISPLAY THEIR ACCOUNT ON THE INTERNET.

GET FREE PROJECT TOPICS AND MATERIALS

Open chat
Powered by
Hello,
How may we assist you please?
× How can I help you?